Recently, we introduced you to the drug delivery practice known as “white bagging.” To reacquaint you with it, here’s a refresher: It is the practice in which a specialty pharmacy is responsible for the delivery of a prescription drug to a health care provider (ex. physician, hospital) that will administer the drug to a patient, instead of the provider or patient obtaining the medication themselves. “White bagging” helps the patient get the drug they need in a safe, efficient, and cost-effective manner.

It’s an emerging issue in state legislatures, and indeed just recently the Coalition of Wisconsin Employer Groups Concerned about Health Care Costs alerted legislators of their opposition to a bill that would ban health plan sponsors from choosing to deliver drugs through “white bagging.” Citing hospital markups on prescription drugs as a key reason why “white bagging” is an important tool to reduce overall health care costs, this growing group of Wisconsin employers states:

The passage of AB 718/SB 753 would remove an important tool that slows and even sometimes reduces health care costs for employers while maintaining quality health care for their employees and employee families. AB 718/SB 753 would eliminate “white-bagging,” a process health insurers have implemented to deliver clinically administered drugs directly to the clinic/patient when it is safe to do so. This practice is a necessary tool to address significant hospital mark-ups and keep medications reasonably affordable.

In fact, a review of legislation prohibiting white bagging found that doing so could cost the state $2.1 billion dollars. Click the chart to view the full analysis.

THE SUN WILL COME OUT TOMORROW. . .

We’re hoping Annie’s optimistic lyrics are applicable to the pharmaceutical companies’ use of orphan drugs. The Orphan Drug Act of 1983 gives drug manufacturers financial incentives to create drugs that treat rare disease, including a seven-year exclusivity period on the market for the drug. Like some best laid plans, the orphan drug designation has gone awry, allowing pharmaceutical companies to use the system to keep their patented drug in an exclusivity period, creating yet more medications that can be too expensive for some patients. 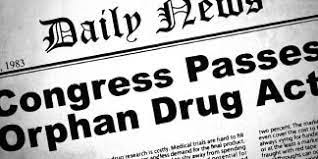 The Health and Human Services Office of Inspector General looked at a set of 40 prescription drugs, 20 in Medicare Part B and 20 drugs in in Medicare Part D and found that 22 of the drugs 40 were designated as orphan drugs. Here’s the rub: 15 of those 22 orphan drugs also had approved non-orphan indications, making them only partial orphan drugs. So, for patients with common diseases, the orphan drug designation may mean it should have gone generic already, or at least cost less than it does.
Take a look here at the OIG report and if interested, and here’s an infographic we put together that simplifies this issue.

Unfortunately, within the prescription drug supply and payment chain, there can be a lot finger pointing and blame for unaffordable prescription drugs. Not surprisingly, pharmaceutical companies are very good at the blame game while not taking any responsibility for the drug prices they alone set and raise.

Check out this Infographic to see how PBMs reduce costs for generics, brand-name drugs, and specialty drugs: PBMs Save on Prescriptions for Patients and Plans

What is a PBM? Watch the short video here.

America’s pharmacy benefit managers (PBMs). PBMs are advocates for consumers and health plans in the fight to keep prescription drugs accessible and affordable. PBMs administer prescription drug plans for 266 million Americans and have been able to achieve an overall stable cost trend for prescription drugs by innovating consumer-friendly, market-based tools that encourage competition among drug manufacturers and drugstores and incentivize consumers to take the most cost-effective, clinically appropriate medication.

BACK TO PRESS RELEASES
BACK TO newsroom

This website uses cookies to improve your experience while you navigate through the website. Out of these cookies, the cookies that are categorized as necessary are stored on your browser as they are essential for the working of basic functionalities of the website. We also use third-party cookies that help us analyze and understand how you use this website. These cookies will be stored in your browser only with your consent. You also have the option to opt-out of these cookies. But opting out of some of these cookies may have an effect on your browsing experience.
Necessary Always Enabled
Necessary cookies are absolutely essential for the website to function properly. This category only includes cookies that ensures basic functionalities and security features of the website. These cookies do not store any personal information.
Non-necessary
Any cookies that may not be particularly necessary for the website to function and is used specifically to collect user personal data via analytics, ads, other embedded contents are termed as non-necessary cookies. It is mandatory to procure user consent prior to running these cookies on your website.
SAVE & ACCEPT